The most important meal of the day

The English Breakfast is one of the many ways to cure a hangover. If you’re feeling weary this weekend, head out for brunch at one of the places to get a dose of bacon, eggs, sausage and toast all on one glorious plate. Here are three of our top picks for an English Breakfast plate.

Pie Society has gained quite a following for their pies, but they have the meal to save your life after a hard night. The English breakfast is served all day, everyday! For RMB68 you get two eggs, one sausage, two slices of bacon, tomatoes, mushrooms, beans and toast. The bangers are courtesy of Bad Boy Bangers and have an herby, fatty, meaty full flavor. The beans are the requisite canned Heinz and the fried eggs have a perfectly soft yolk that creates a sauce to tie the meal together.
Find it: Pie Society, No. 102, Bldg 5, 67 Xingu Lu 番禺路381号 OR 381 Panyu Lu 幸福路67号
Tel: 136-7189-3024

This article was originally published on www.cityweekend.com.cn. Read the original article.

Succulent meat and buttery shortcrust pastry – mmm, pie. Thankfully, former pop-up pie purveyors Pie Society have now opened a permanent location and you can indulge in this satisfying combination whenever the craving hits.

The new space is more bright and business-like (i.e. just like a traditional British pie and mash shop) than cosy, but opt for the Seriously Beefy hand-made pie (48RMB) filled with juicy rump steak cooked in Guinness with carrots and mushrooms, and you’ll feel lovely and warm after just a few bites. An extra 14RMB will get you a side of mashed potato or some mushy peas to fill your belly and feed your soul. 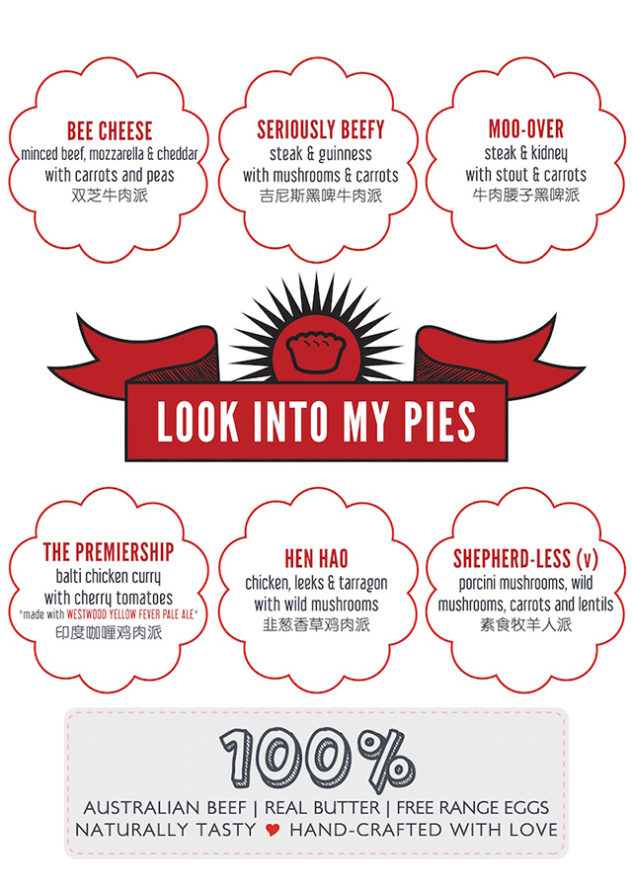 For its opening weekend, Pie Society is offering free drinks and special meal deals. The first 50 customers receive a complimentary Jameson whiskey and ginger and there is a free keg of ale at 6pm. The pie and mash or bangers and mash set, which comes with 2 sides and a soft drink, whiskey or ale, is only 85 RMB! The British pie-makers are famous for catering top notch grub to music festivals and other big events in the UK. It is toted as the first eatery in Shanghai to offer proper steak and kidney pies made with shortcrust pastry and top quality Australian beef.

This article was originally published on http://shanghaiist.com. Read the original article.

The bright and breezy space is made to feel just like a traditional British pie and mash shop and it delivers in the taste stakes too, with creamy mash and authentic mushy peas and gravy to go with your choice of pie. Flavours include Seriously Beefy (Guinness-cooked rump steak), Hen Hao (chicken and mushroom), Shepherd-less (a veggie-friendly mix of lentils, asparagus, wild mushrooms and carrots) and the Premiership (chicken balti curry cooked in Westwood pale ale).

Bangers and mash is available for 55RMB (try the delicious Cumberlands), a single pie is 48RMB and all sides are 12RMB each (in addition to the mash and mushy peas, you can also have steamed veg or a sweet potato mash) and a range of three gravies (and a chutney) are 5RMB each.

Catch the pie and mash pop-up every Sunday in May

Better known as DJ Siesta, the promoter behind Shanghai’s biggest drum ‘n’ bass nights, Jane Tan has launched her first foray into the foodie world with British-style pie brand Pie Society. She’ll be selling her wares every Sunday in May as part of her pie and mash pop-up at Daga Cafe – 85RMB gets you a pie, two sides, a topping and a pint. Sides include pork scratchings, mushy peas and, of course, mashed potato.

Tan is currently producing a number of different fillings to go inside her delicious pie crusts including steak and ale, chicken and tarragon, and a cheesy vegetarian offering. We were fortunate enough to get a preview tasting and they were easily some of the best pies we’ve eaten in Shanghai. It ought to be well worth catching her pop-up pie stall this month.

Pie Society is at Daga Cafe every Sunday in May.

We delve deep into Shanghai’s food underbelly to give you an alternative view of the city’s dining scene.

Alternative Eats this month comes to you hot off the press. There is a new, Englishstyle pie company in town and by the looks of things, they may just “pie off” the competition. Pie Society made their debut onto the Shanghai foodie scene by hosting a pop-up restaurant at Magnet and sold out within two and a half hours. This was shortly followed by a stand at Shanghai Tattoo’s Day Drinking event where they sold out within two hours. Jane Siesta of Pie Society claims they “just can’t make them fast enough”!

You may recognise Siesta as “DJ Siesta” who has been working as a DJ/Promoter for the past 15 years, however, her second passion in life is cooking. After living and studying in the UK, Siesta fell in love with the country’s food and the British food revival that the UK has experienced over the past ten years. You may not hear this everyday, but Siesta claims “UK food is amazing”! After having already perfected her cottage pie recipe, she set her sights on pastry encased pies, which she made for the first time two months ago. After they were so well received by her British friends, she decided it was time to expand her horizons.

The concept behind Pie Society came about from Siesta’s idea of bringing together creative, young, food lovers to eat, talk and make pies together, hoping that it would act as the catalyst for other projects spawning from their full and inspired bellies. Siesta has already met a young pie enthusiast from the UK by the name of “Butcher Farrell” with whom she will be collaborating in the future through her events, so the proof really is in the pudding, or should we say, pie!

Pie Society uses 100% free-range meat and eggs in their pies along with locally sourced vegetables to ensure the highest taste and quality for customers. As Pie Society’s pies are made in the traditional English way, a flaky, crispy, baked pastry top is essential and therefore Siesta home makes her pastry dough using the finest flour and fats. Due to the nature of pop-up events, if you get there late in the day, you will find that most flavours have sold out, however, Pie Society pies currently come in steak, mushroom and ale, steak and cheese, chicken, leek and tarragon, as well as the Homity Pie (a vegetarian option). Speciality pies are also available such as the Irish Shepherdless and Gourmet Steak and Stilton. Siesta is also always developing new flavours and is open to new suggestions for speciality pies from fellow pie worshipers. 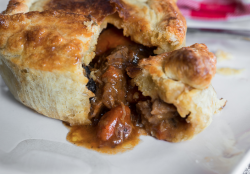 Pie Society is so new that they are not available in stores yet, however, they have launched a website which promises to be transactional in the near feature. The pies will also be out to play for a month long stint of Sunday pop-ups in May at DAGA (36 Tai’an Lu, near Xingguo Lu. Tel: 3469 5337), where Siesta will be offering up pie and pint brunches. The menu will be designed around the drinks, sides and condiments. Siesta will also be at DAFF in June, when she will be inviting guest pie-makers to create their own versions of the pastry dish. Single pies start from RMB 30 (for the veggie version) and Pie and Pint sets with two sides come in at RMB 85 or RMB 65 without sides.

This article was originally published on shanghai.talkmagazines.cn. Read the original article.

Keep up to date with Pie Society